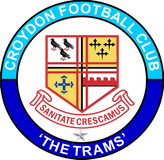 In the salubrious surroundings the yellow Jets of Westside were about to make their own Story against the blue sharks of Croydon.

Storm clouds loomed overhead but the only rain was the raining of goals.

Although Croydon had the better of the early exchanges it was a well sprung offside trap, where the ball went north, the flag stayed south, the cross shot from the darting Eastside saw Westside take the lead direction. 1-0. Kacie Nadison Singh found Yoyo Oke almost immediately but her shot was saved. Another Kacie/ Yoyo combo was also well saved as Yoyo bustled through. Jenny Brown at right back brought the ball forward from defence, fed a beauty of a ball to Yoyo who this time rounded the Yellow keeper, and brought the game level for the trams. 1-1. Yoyo nearly helped take the lead. Georgina Fangawa did well on the right and once again found a busy Yoyo who slipped the ball past the keeper, but it went inches wide. The central trio of the central jet gang look threatening but Gracie Leigh Dunkley made a good interception from a neat movement by Westside and Megan Webster won several headers in a matter of a few minutes.

Westside had rode their luck and number 9 was pressuring the trams defence. Shooting over from range. A hopeful ball across the six yard box was fumbled by Steph Liddle and landed into the path of on rushing Yellow striker 2-1. Sara Kytosaho was looking formidable in the back four and another string to her bow is her throws. She launched her catapult to Tammie Adekanmbi whose shot was blocked, it spun to Georgina who hit it first time, but the spin made it sail wide. There followed a long spell of pressure by the blues with the introduction of Sofia Abad into a role just in front of back four. It was a revelation. Sara’s long throws were a constant thorn on the right and backed up well with versatile Jenny. Lucy Casey was first to a bouncing ball and half volleyed goal-bound to see it headed away. Quick movement from Sofia to Kacie over to Tammie nearly had a classic goal but judged off side.  Westside pumped a long hopeful ball up that Steph was able to catch. Lucy played Yoyo through who hit the side netting and then a defence splitting ball by Lucy found Georgina on the right. Her pass inside was knocked for a corner. A short corner from Chantae Wallace to Kacie was cleverly passed on to Lucy. Her deft pass to Tammie saw Tammie upended by a yellow adversary and Yoyo coolly placed the penalty home. 2-2. Lucy herself had a cracker that was blocked by the face of a jet, but alas all the chances Croydon were creating were just not paying the dividends they deserved.

Half Time whistle was blown and the gangs from east and west re-formed.

The Trams again started very bright. Gracie –Leigh slipped a ball to Tammie who darted back and forth before having her shot blocked by the yellow wall. Yoyo was again busying herself and battled through to get a shot, but straight at the keeper. A melee ensued shortly after in the jets box, but as the ball ricocheted about it was a lofted clearance that averted the blues once again. Westside had hardly been out of their half. A long clearance found their impressive number 8 beyond the static defence looking for offside. Sofia read the move and intercepted it as the last player. A vital challenge but for Sofia her last act. A broken leg ending her game. A brave challenge for the cause. Croydon continued to dominate but shots by Georgina and Lucy were both blocked, Georgina hitting the rebound over the bar. Westside started to show more muscle and a foul, yanking on Yoyo gave Gracie Leigh a good chance from the edge of the box. Her well executed strike was well held by the yellow keeper. Vanessa Moreno made a good first tackle on her return to the field and the Trams looked good.  The tragedy of Sofia may be the reason, but suddenly Westside started to take over the midfield. The small neat triangular passing was splitting the Croydon apart. No8 had a curling shot well saved by Steph. Megan committed a foul as she back tracked and the resulting free kick bounced off the cross bar. The Westside number 8 controlled it well, turned and hit a low shot through the crowded box and past a unsighted Steph. 3-2.  Croydon responded with Georgina and Tammie coming close, but the goal lifted the yellows more who were looking much brighter as the storm cloud above started to disperse. Sara was playing behind the defence and was constantly pressured. Tammie and Yoyo did a lovely one two that the keeper did well to get down too. As Croydon pushed to equalise, Westside counter attacked. A long Lucy drive was well held and then immediately pumped up front where an audacious overhead kick went flying over. Number 8 was on fire, and twisted and turned for the 4th, beating Steph from just inside the box, another low drive. 4-2. Georgina had another shot saved and Gracie Leigh showed great strength to get through 2 tackles before finding Georgina who was again couldn’t get that final pass out.  Chantae was helping in the midfield, but the energy of the yellows was too much and the 5th came from 45 yards. In true Romeo style, the question was ‘How far out thou’. Steph was unsighted again, got a hand to it, but the power and swerve were too much. 5-2. Croydon never give up. Yoyo was fouled with a high footed challenge. The free kick by Kacie saved. Lucy had a volley go over minutes later. As the clock ticked Gracie Leigh found Tammie who crossed for Yoyo to use her head for her hat trick. 5-3.

An end to end game marred by injury to Sofia. Croydon had neat periods in the match and should have won but for a crazy 15-minute spell in the second half where the clinical finishing of westside was the difference.

Players of match: Sofia – brave playing out of her usual position and will be sadly missed. Yoyo – great hat-trick but could have had a few more